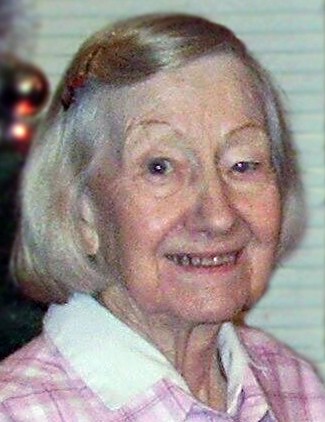 Born November 11, 1922 in Chicago, Adele was the daughter of Alexander and Valerie (Czeslawski) Smietanka. She was raised in Chicago; graduated from Lindblom High School in Chicago and went on to attend Morgan Park Junior College as well as Palos Community College. In 1954 Adele and her husband Bob moved from Riverdale to Lemont, where she resided for 60 years. Adele loved flower gardening, watching the wildlife in her yard, being outdoors, and traveling with her family. She was known for her warmth and kindness and will be remembered as a devoted mother, grandmother, and friend.

Adele was preceded in death by her parents; husband Robert (2009) and one brother, Leonard (Marilyn) Smietanka.

Visitation will be at Blackburn-Giegerich-Sonntag Funeral Home, 1500 Black Road in Joliet on Tuesday, August 14, 2018 from 1:00 p.m. until the time of Adele’s Celebration of Life at 4:00 p.m. Ken Plese will officiate and cremation rites will be accorded following the services.

Preferred memorials may be made as gifts in Adele’s memory to Joliet Area Community Hospice, 250 Water Stone Circle, Joliet, IL 60431

To order memorial trees or send flowers to the family in memory of Adele Scott, please visit our flower store.
Send a Sympathy Card