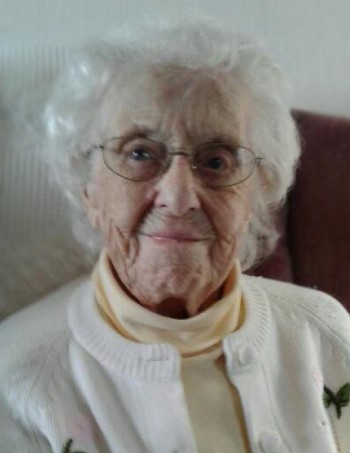 Born February 12, 1917 on the Huston family farm in Braceville Township, Audrey Maie was a daughter of Russell A. and Rose E. (Powell) Huston. She was raised in Braceville Township and graduated from Gardner South Wilmington High School with the Class of 1934. On November 29, 1941, Audrey married William F. Endrst in the Braceville Methodist Church, and William preceded her in death on September 7, 1997 following 57 years of marriage.

Following high school, Audrey worked as a seamstress at the various local clothing factories for many years. She later gained employment as a title clerk and worked for both the Perona and Kaiser auto dealerships in Coal City. Audrey also held employment with the Village of Coal City, where she served as the Clerk for more than 11 years.

She was a member of the Coal City United Methodist Church, where she was active with both the Friendship Circle and United Methodist Women. In addition, Audrey belonged to the VFW Auxiliary and was past Matron of the Order of the Eastern Star.

A private family visitation and service will be held at the Coal City United Methodist Church with Reverend Brad Shumaker officiating. Burial will follow in Braceville-Gardner Cemetery, where Audrey will be laid to rest with her late husband.

Preferred memorials may be made as gifts in Audrey’s memory to the Coal City United Methodist Church, 6805 East McArdle Road, Coal City, IL 60416 or to a charity of the donors choosing.

Family and friends are encouraged to sign the guest book, upload photographs and share Audrey’s memorial page online through social media by logging onto: www.ReevesFuneral.com/obituary/Audrey-Endrst

To order memorial trees or send flowers to the family in memory of Audrey Endrst, please visit our flower store.
Send a Sympathy Card