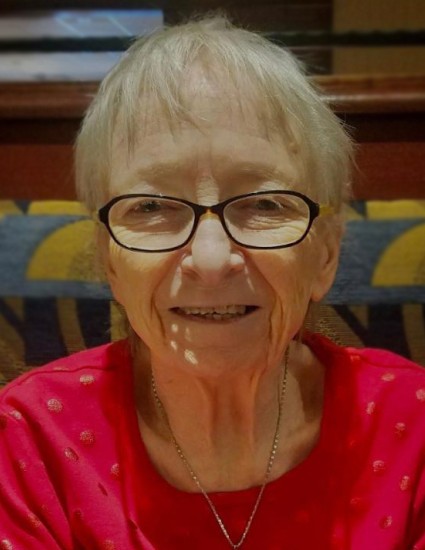 Age 82 of Wilmington, passed away peacefully, Friday, August 20, 2021 at Alden Estates of Shorewood.

Born February 20, 1939 in Oak Park, Illinois, Barbara Jean was a daughter of George Edward and Martha Muriel (Brown) Sahlin. She was raised and educated in Berwyn and graduated from Morton High School with the Class of 1957. During her high school years, Barb participated in the band playing both the bells, as well as the drums. She also learned the Marimba, which was her father’s, and continues to be a family heirloom. Barb went on to attend dental assistance training at Morton Junior College, however never physically worked in the dental field. She continued with her high school job at Shank Manufacturing until her marriage, and later held employment in the catalog department at Sears and Roebuck. On January 31, 1959, Barb married John Michael Persic in Holy Mount Catholic Church in Cicero and together they moved to Wilmington in 1960. It was in Wilmington, where Barb and John settled, made their home, and raised a family together.

As family and friends can attest, Barb truly understood the secret to a life well lived. She valued her friends and loved ones, and was a humble spirit ready to serve. Barb was never afraid to speak her mind, and she was a constant source of strength for those around her. She was a member of St. Rose Catholic Church in Wilmington, where she was active in the Council of Catholic Women and honored as a past Woman of the Year; was active with the Wilmington Lions Club, the Wilmington Historical Society, and belonged to the Kankakee Women’s Club. When the children were growing up she was constantly involved in the kid’s activities, and was a long time Den Mother with the Scouts. In addition, Barb was always proud to support John in all of his vast activities and meetings.

Barb’s intrigue and love of giraffe’s, which began as a child, escalated into an immense collection of everything giraffe. She was a great fan of the Chicago Cubs, possibly even more so than of giraffe’s; enjoyed country music, as well as the Beatles, and in recent years passed the time coloring in her adult coloring books.

When reflecting on the life of Barbara Persic, it is easy to see her greatest passion was her unwavering strength and unconditional love for her family; her kids, grandkids and great grandkids. She truly understood the value of hard work and responsibility, and her life was an inspiration to all who were near. Barb was a shining example of kindness and selflessness, and she treasured her loved ones above all else. Her caring spirit touched the lives of those around her, and in line with her beloved giraffe’s, Barb’s characteristics of aspiration, peacefulness, guidance and spirituality was always demonstrated in how to help others in any way she could. Deeply loved, Barb will be forever missed.

The family will receive friends for a visitation at Baskerville Funeral Home, 700 East Kahler Road in Wilmington on Monday, August 23, 2021 from 10:00 a.m. until the time of funeral service 12:00 p.m. Deacon Jay Plese from St. Rose Catholic Church in Wilmington will preside.

Those wishing to participate in the service virtually are welcome to join the livestream on Monday August 23, 2021 beginning at 12:00 noon. A link for the event is available on Barb's memorial page.

Burial will be in Mount Olivet Catholic Cemetery in Wilmington, where Barb will be laid to rest with her late husband, John.

Preferred memorials may be made as gifts in Barb’s memory to the Wilmington Area Historical Society, Saint Rose CCW or to Lightways Hospice.

Family and friends may sign the guest book, upload photographs or share Barb’s memorial page online by logging onto: www.BaskervilleFuneral.com/obituary/Barbara-Persic

To order memorial trees or send flowers to the family in memory of Barbara Persic, please visit our flower store.
Send a Sympathy Card