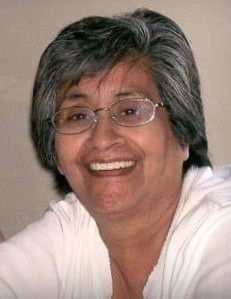 Born November 4, 1939 in Joliet, Diana was a daughter of Moises and Juanita (Ortiz) Reyes. She was raised and educated in Joliet, and graduated from Joliet Township High School with the Class of 1957. On August 4, 1965, Diana married William S. Lewis at Saint Mary’s Carmelite Catholic Church in Joliet and together they resided in Joliet until, moving to Goose Lake in 1986.

She and her husband were members of the Goose Lake Area Club and she was active with the Parent Teacher Association when her children were in school. While raising her family was her number one priority, Diana did hold employment with several different jobs, starting at Saint Joseph Hospital in Joliet, and later the IGA grocery store in Coal City and the Morris Bakery. She enjoyed cross stitch and playing cards, as well as baking for her family and friends. Diana took great pleasure in being out on the town, and looked forward to any opportunity to go shopping or out to dinner.

Diana was preceded in death by her parents, her husband Bill on May 15, 2011, three brothers: Robert Reyes, Sal Reyes, and Richard (Debra) Reyes; one sister, Dorothy (Rudolph) Carlson, and her sister-in-law, Sandra Mizicko.

Per Diana’s wishes, cremation rites have been accorded.

The family will receive friends for a memorial visitation on Saturday, June 26, 2021 at Reeves Funeral Home, 75 North Broadway Street (one block north of Illinois Route 113), in Coal City from 1:00 p.m. until the time of services, 2:00 p.m.

Family and friends are encouraged to sign the online guest book, upload photographs, and share Diana’s memorial page by logging onto: www.ReevesFuneral.com

To order memorial trees or send flowers to the family in memory of Diana Lewis, please visit our flower store.
Send a Sympathy Card