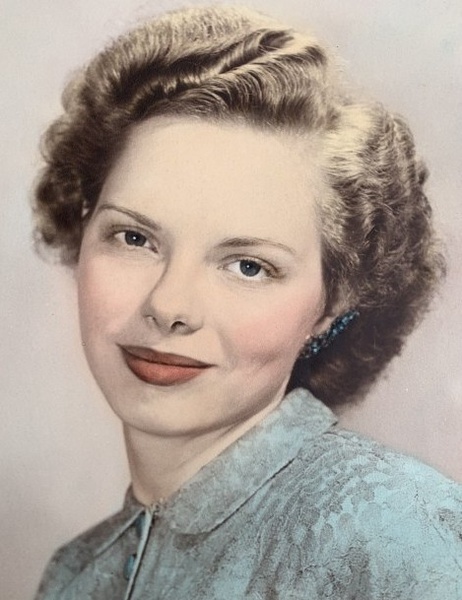 Age 92, passed away peacefully July 8, 2019, at home on a sunny afternoon surrounded by her loving family.

Born October 7, 1926, Dottie, the youngest daughter of five children, was raised on a farm in Mazon, IL. She excelled in school, winning the state spelling bee and graduating as her high school valedictorian in the Class of 1943. In 1948, in Chicago, she met William (Bill) Perry, the man she would marry the next year and who would be the father of their children. They shared 50 years of marriage together, giving the best of themselves to raising their five children.

Dottie and Bill spent their lives making a home for their family. Dottie enjoyed her roles administering the sale of hand controls her husband, Bill had invented; and as beauty consultant. Always happy to share a cuppa over the kitchen table, and always welcoming anyone to stay for supper, Dottie kept lifelong friends, and never stopped making new ones.

After her husband’s passing in 1999, she began a new chapter in her life, traveling around the US, including Alaska, and to Europe, Africa, and South America, making a host of new friends and getting a second chance at love.

Later in life, when her health began to deteriorate, she continued to live at home thanks to care from her son Lee and his wife Cheryl. On the day of her death, she was surrounded by family and friends and the mountains of love she had made.

Dottie was preceded in death by her husband Bill, her son, Roger, her sister, Wilma Gilbertson, and her brothers Bud Petry, Raymond Petry, and Paul Petry.  She is survived by her daughter Jill, and sons Roy, Lee, and Richard.

To order memorial trees or send flowers to the family in memory of Dorothy Perry, please visit our flower store.
Send a Sympathy Card