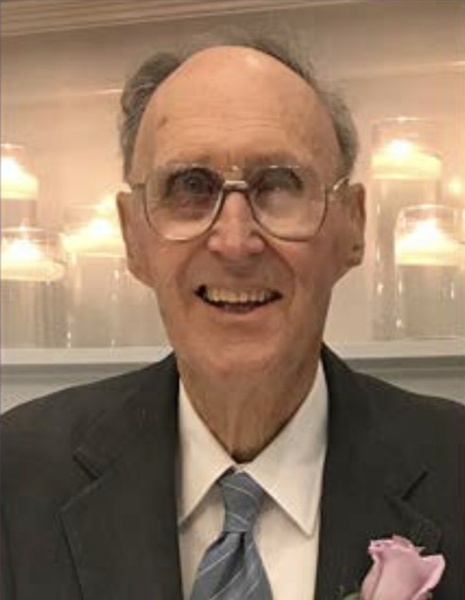 Edmund J. O’Connor Age 97 of Moline, formerly of Wilmington, passed away peacefully at home on Tuesday, May 25, with his spouse and family at his side. Eldest of three, Edmund was born in rural Elwood to Leo J. and Marie R. (Reiter) O’Connor on June 4, 1923.

Ed grew up helping run the family farm under horsepower, and tinkering with machinery from an early age, eventually becoming a skillful mechanic and masterful welder. He attended Coldwater school house a mile west of the family farm, then Joliet Catholic High School, graduating class of 1940. Ed entered the Carmelite Seminary in Niagara Falls, Ontario, but returned to farming to support his family following the death of his father in spring of 1941. During WWII, he worked mixing TNT at the Kankakee Ordnance Plant, while continuing to farm.

On August 25, 1951, Ed married Angela Worland at Sacred Heart Church in Joliet, and continued farming near Symerton. After welcoming their fourth child, they decided to move to Wilmington and Ed began working for St. Rose Parish, in charge of maintenance. He enjoyed working for Rev. George Kuzma, who directed many ambitious projects, including grades 5-8 expansion of the school building, and the erection of a fine new steeple for the church. Ed’s selfless devotion to the parish extended to leading CCD classes, membership in several Catholic societies, and facilitation of special events held on parish property, even beyond his retirement after 41 years of service.
Also quite active in the community, Ed served on the City of Wilmington Police Commission, and completed upgrades for the Park Board, from new fences and bleachers at the baseball diamonds to installation of playground equipment and fencing for the Kiddie Korral. In his free time, he enjoyed taking his family camping, fishing, swimming or ice-skating. Ever the proud, patient and supportive mentor, Ed possessed a powerful gift for listening intently and speaking gently. Everyone who knew Ed always felt respected in conversation, and touched by his humor.

Ed is preceded in death by his parents, only sister, Mary Jane (James F.) Keigher, only brother, Gerald V. (Theresa) O’Connor, and one son, Daniel.

The family will receive friends for a memorial visitation at Christ the King Catholic Church, 3209 60th Street in Moline on Friday, June 4, 2021 from 10:00 a.m. until time of funeral service 11:00 a.m. A Mass of Christian Burial will be celebrated with Father Levitt presiding.

Those wishing to participate in the services virtually are welcome to join the live stream Friday morning, June 4, 2021 beginning at 11:00 a.m. A link for the event will be available on Ed’s memorial page.

Ed will be laid to rest in Mount Olivet Catholic Cemetery in Wilmington at a later date.

Preferred memorials may be made as gifts in Ed's memory to Kuzma Care Cottage , 635 S Main Street, Wilmington, IL 60481

Family and friends are encouraged to sign the guestbook, upload photographs and share Ed’s memorial page online through social media by logging onto: www.BaskervilleFuneral.com/obituary/Edmund-J-OConnor

Cremation services and memorial arrangements have been made under the direction and care of Baskerville Funeral Home in Wilmington. ( 815-476-2181 )

To order memorial trees or send flowers to the family in memory of Edmund O’Connor, please visit our flower store.