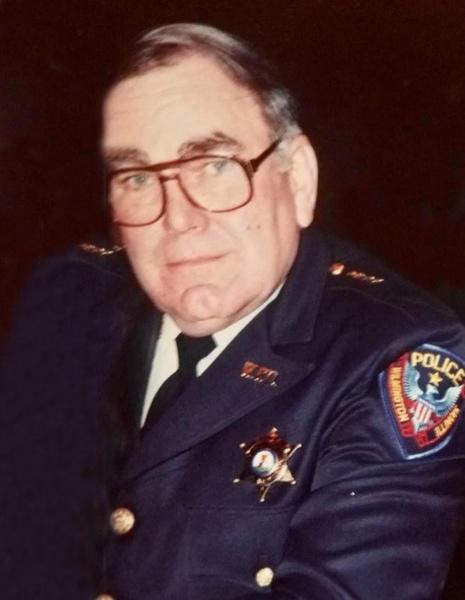 Age 84 of Wilmington, passed away peacefully Saturday, February 6, 2021 at the home of his son in Braidwood.

Born May 25, 1936 in Virginia, Illinois, Franklin William was a son of Sherman William and Freida (Davis) Lyons. He was raised and educated in Virginia; graduated from Virginia High School, and went on to honorably serve in the United States Marines.

Chief Lyons served the City of Wilmington as Chief of Police for 25 years until his retirement. He was a member of the Wilmington Moose Lodge; coached for the Joliet Raiders, Wilmington Bobcats, where he served on the board of directors, and the Wilmington Baseball Association. In addition, Frank was a loyal member of the Wilmington High School Chain Gang. In years past, Frank enjoyed coaching his kids; he loved street rods and going to car shows, and passed his time working crossword puzzles. Frank will be remembered not only for his baseball hats but also for his true enjoyment of coffee.

Above all, aside from his tremendous love of family, Frank’s job was very important to him, and he loved the opportunity to serve the community of Wilmington as their Police Chief.

Frank was preceded in death by his parents; first wife Dorothy; second wife Wilma and one brother Robert Lyons.

The family will receive friends for a visitation at Baskerville Funeral Home, 700 East Kahler Road in Wilmington on Thursday, February 11, 2021 between the hours of 3:00 p.m. and 8:00 p.m.. Funeral services will follow on Friday morning at 11:00 a.m. in the funeral home.

Those wishing to participate in the funeral services virtually are welcome to join the live stream beginning on Friday morning, February 12, 2021 at 11:00 a.m. A link for the event will be available on Frank's memorial page.

Burial will be in Oakwood Cemetery, Wilmington, where Frank will be laid to rest with his late wife, Dorothy.

Preferred memorials in Frank's memory may be made to the Tunnel to Towers Foundation, 2361 Hylan Boulevard, Staten Island, NY 10306 (https://tunnel2towers.org/)

Family and friends are encouraged to sign the guest book, upload photographs and share Frank’s memorial page online through social media by logging onto: www.BaskervilleFuneral.com/obituary/Franklin-Lyons

To order memorial trees or send flowers to the family in memory of Franklin Lyons, please visit our flower store.