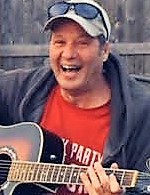 Age 54 of Godley, formerly Chicago, passed away Monday February 5, 2018 at his home.

Born September 6, 1963 in Chicago, George Paul was a son of the late Conrad and Rosemary (nee Mills) Stuba. He was raised and educated in Chicago and attended John F. Kennedy High School. George was a working man who labored at many different kinds of jobs, and enjoyed playing the guitar in his spare time. He was also a dog lover, who liked hiking and being outdoors.

Survivors include his brothers: William (Leslie) Stuba of Newark, David Stuba of Stockton, Missouri, Ralph Stuba of Berwyn, and Richard (Kristin) Stuba of LaGrange; as well as several nieces and nephews.

George was preceded in death by his parents.

Per George’s wishes, cremation rites have been accorded.

Family and friends may sign the online guest book, upload photographs, or share George’s memorial page by logging onto: www.ReevesFuneral.com

Cremation services and arrangements have been made under the direction and care of Reeves Funeral Homes, Ltd., 408 East Washington Street, in Morris. (815-942-2500)

To order memorial trees or send flowers to the family in memory of George Stuba, please visit our flower store.
Send a Sympathy Card