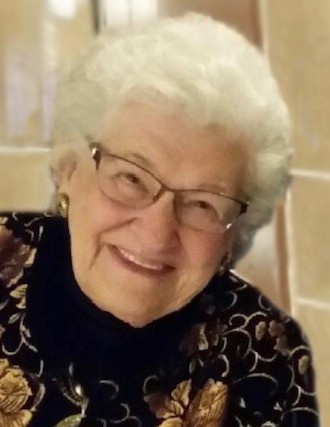 Gladys Elizabeth Rink (nee Rieches) peacefully passed away at her home in Henderson, NV on January 25, 2021 at the age of 93.  She was born May 26, 1927, on a farm in Iroquois County near Cissna Park, IL, as the oldest of 3 children of Herman and Ella (Schumacher) Rieches.  She spent her childhood years living on this farm and received her first 5 years of formal schooling at the Ash Grove Lutheran school and then the remaining 3 years of grade school at the Willoughby School (a one-room country school), near Claytonville, IL.  She continued her education at Cissna Park High School graduating with the class of 1945.  Gladys then continued her education at the Gallagher School of Business in Kankakee, IL.  She was employed with J. L. Simmons Construction Company while they built the Armstrong Cork factory in Kankakee.  After Armstrong Cork was built, she became employed there working as an Accounts Payable clerk.  It was while working at Simmons that she met her future husband, Frank William Rink.

In 1949 she married Frank.  They made their first home in rural Kankakee County, later moving to Braidwood in the Stonich home where she lived for 43 years.  In 1997 she retired and moved to Henderson, NV, where she lived until the time of her death.

Homemaking, crafts, and sewing were enjoyed by Gladys.  Ceramics later became a profitable venture for Gladys, as she made ceramics for Dreamland Gifts in Wilmington, IL.  Gladys returned to the working world after her six children were in school.  In 1972, she was employed at the First National Bank of Wilmington as a teller, then Executive Secretary and later Assistant Cashier.  She was employed at the bank for 17 years.

While her children attended St. Rose School in Wilmington, Providence High School in New Lenox, St. Francis High School in Joliet, Gladys was active in the Parent-Teachers Association serving as Vice President.  She was also active as a 4-H leader and Boy Scout Den mother.

Gladys was a member of the Immaculate Conception Church in Braidwood, and when she moved to Henderson, NV, in 1997, and until her passing, a member of St. Thomas More Catholic Community where she served on the Hospitality Committee.  At her home in Sun City, Gladys was a member of countless clubs and committees, leading arts and crafts activities at the Sun City Senior Center

Gladys was preceded in death by her husband, Frank in 1988, her mother and dad and son, Steve.

She is survived by her two daughters and four sons, 11 grandchildren, Justin, Chad, Heather, Tim, Alexandra, Annalise, Ellie, Amy, Kristyn, Katie, Conner; 4 great-grandchildren, Nathan, Natalie, Eleanor, and Delilah, one sister, Aldine (Dave) of Lafayette, IN, and one brother, Harry (Jean) of Clinton, IN.

A celebratory funeral service will be held at 10AM on April 17, 2021 at St. Rose Catholic Church, 604 S. Kankakee Street in Wilmington, IL. A Mass of Christian Burial will be presided by Father Sebastian Gargol.

For those not able to attend, and wishing to participate in the services virtually, a live stream will be available on Saturday morning, April 17, 2021 beginning at 10:00 a.m. A link for the event will be available on Gladys’ memorial page, as well as broadcasted via Facebook Live at www.Facebook.com/ReevesBaskervilleFuneralHomes

Burial will be in the Mount Olivet Cemetery in Wilmington, IL, where Gladys will be laid to rest next to her late, beloved husband Frank.

In lieu of flowers, the family wishes donations are made to The American Lung Association. https://action.lung.org/site/Donation2?df_id=31271&mfc_pref=T&31271.donation=form1

Family and friends are encouraged to sign the guest book, upload photographs and share Gladys’ memorial page online through social media by logging onto: www.BaskervilleFuneral.com/obituary/Gladys-Rink

To order memorial trees or send flowers to the family in memory of Gladys Rink, please visit our flower store.