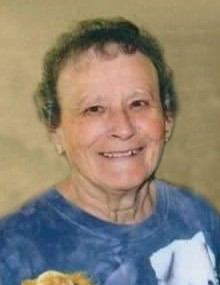 Born July 21, 1936 in Ledford, Illinois, Gloria Lee was a daughter of William and Lucille (McDowell) Poyner. She was raised in Ledford; graduated from Harrisburg High School with the Class of 1954, and went on to earn her degree in bookkeeping in Evansville, Indiana. On April 27, 1957, Gloria married Merle Morris in Joliet, Illinois.

A devoted wife and mother, Gloria also held employment as a bookkeeper for several years with Fisher Body Company. She enjoyed sewing and handiwork; knitting, crocheting and embroidery. She took pleasure in gardening, cooking and also working crossword puzzles. One who was always conscience of her health, Gloria spent countless hours walking, as well as caring and tending to animals in which she dearly loved.

Gloria was preceded in death by her parents.

Private family services will be held at Baskerville Funeral Home in Wilmington, and burial will be in Maple Grove Cemetery in Bonfield, Illinois.

Preferred memorials may be made as gifts in Gloria’s memory to St. Jude Children’s Hospital, 501 St. Jude Place, Memphis, TN 38105 or to a non-kill animal shelter of the donor’s choosing.

Family and friends may sign the guest book, upload photos or share Gloria’s memorial page online by logging onto: www.BaskervilleFuneral.com/notices/Gloria-Morris

To order memorial trees or send flowers to the family in memory of Gloria Morris, please visit our flower store.
Send a Sympathy Card