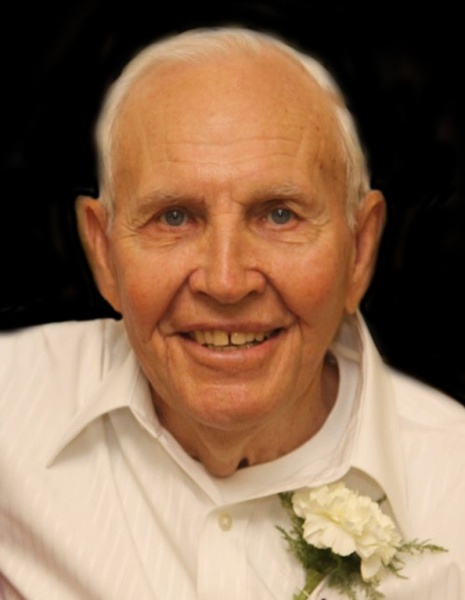 Herman V. Schaefer, Jr., a lifelong resident of Grundy County passed away peacefully on Sunday, January 19, 2020.  Born on September 23, 1927 in Seneca, IL, Herman was the son of Catherine Mary (Scheffer) and Herman V. Schaefer, Sr. Herman had six (6) brothers and sisters including John (Lillian) Schaefer, Joseph (Lucille) Schaefer, Robert (Irene) Schaefer, Sylvia (Richard) Redmond, Mary (Gale) Wicks and Bernadine (Al) Ruggie who, along with his parents, all have preceded Herman in death, except sister-in-law Irene Schaefer.  Herman attended Seneca schools and was a member of St. Patrick’s Catholic Church in Seneca early in his life.  He met Carol J. Hill in high school and they were married at St. Patrick’s on July 29,1950 and were married for 67 years until Carol preceded Herman in death in August of 2017.  Herman worked for Straightway Dairy for a short time after high school until he was able to live out his dream and go into farming in partnership with the Dunn Brothers of Morris.  Herman and Carol joined Immaculate Conception Parish in Morris and became active members serving on the parish council and helping to raise funds for capital and operating needs of the church over the years.

As a lifelong grain farmer and recognized cattleman, Herman raised a large herd of Simmental and Angus crossbreed beef cattle.  He received local, state and national recognition over the years for his outstanding beef production herd.  In 1980, he was recognized as the Seedstock Producer of the Year by the Illinois Livestock Association.  He had the pleasure of working with 4-H members and enjoyed seeing his cattle shown by youth throughout the state and on a national level.

Herman spent years of service in local and state government roles.  He began his 38 year tenure on the Norman Township Board when he was elected as a Township trustee (“township auditor”) in 1969, serving in this position until he was elected as Norman Township Supervisor in 1981. With his wife Carol as secretary, he continued as Supervisor for 26 years.  In addition, Herman was elected and served two terms on the Grundy County Board, first in 1984 and then in 1988. He was always proud and honored to represent the constituents of District 1.  Herman also served a role in state government when he was appointed in 1979 to a two-year term in Springfield as the Illinois State Chairman of the Agricultural Stabilization and Conservation Service (ASCS) board. He also served as President of the Illinois Beef Improvement Federation and the Illinois Simmental Association.

Burial will be in Mount Carmel Cemetery in Morris, where Herman will be laid to rest with his late wife, Carol.

Donations in honor of Herman may be directed to the Joliet Area Community Hospice, Grundy Community Volunteer Hospice, or Immaculate Conception Church.

Family and friends may sign the guest book, upload photos or share Herman’s memorial page online by logging onto: www.ReevesFuneral.com/notices/Herman-Schaefer

Funeral services and arrangements have been made under the direction and care of Reeves Funeral Homes, Ltd. in Morris. (815-942-2500)

To order memorial trees or send flowers to the family in memory of Herman Schaefer, please visit our flower store.