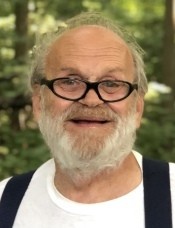 Born September 19, 1944 in Chicago, James was a son of Joseph and Edythe (Gillis) Dabulskis. He was raised and educated in Lemont, and then enlisted into the United States Army. Following his military service, James worked as a television repairman and owned and operated J&B TV in Joliet. He had a great fascination with electronics and spent many hours tinkering with them. James also enjoyed going fishing and taking nature walks in Pilcher Park, and will be remembered for his deep belief in Jesus Christ.

James was preceded in death by his parents and one brother, Joseph Dabulskis.

Per James' wishes, cremation rites are being accorded, and a private Memorial Mass will be held at Assumption of the Blessed Virgin Mary Roman Catholic Church in Coal City. Inurnment with military honors will follow at Abraham Lincoln National Cemetery in Elwood.

Family and friends are encouraged to sign the online guest book, upload photographs, and share James' memorial page by logging onto: www.ReevesFuneral.com

Cremation services and memorial arrangements are being made under the direction and care of Reeves Funeral Homes, Ltd. in Coal City (815) 634-2125 .

To order memorial trees or send flowers to the family in memory of James Dabulskis, please visit our flower store.