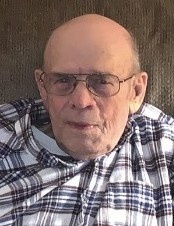 Born June 9, 1932 in Springfield, Kentucky, James Ward was a son of Lucian and Augusta Russell. He was raised in Springfield, and on December 23, 1953 he married Sylvia LaVerne Tatum in Jeffersonville, Indiana. James then enlisted into the United States Army and served honorably from 1954 to 1955, working as a gunner and drove a supply truck.

Following his military service, he worked for his grandfather on the family farm. In 1966, James moved with his family to Morris, Illinois after hearing about good jobs from his sister. He gained employment with Material Services in Morris and worked there for 29 years. In his retirement, James continued to work and owned and operated Russell’s Nuisance Control.

He was a past member of the Loyal Order in Moose in Morris and a proud member of the National Rifle Association. James was an avid hunter and fisherman, and was a member of  the Trappers Association – Chapter 17. He had a gift for gardening as well as beekeeping in recent years. James will be remembered for his unique sense of humor and was happiest when he was surrounded by his family and out hunting and trapping with his boys.

The family will receive friends for a visitation Thursday, August 5, 2021 at Reeves Funeral Home, 408 East Washington Street (one block east of Illinois Route 47), in Morris from 4:00 p.m. until time of funeral service, 7:00 p.m., with Reverend Dr. Roy Backus officiating.

Family and friends will gather Friday, August 6, 2021 at the funeral home to leave in funeral procession at 10:00 a.m. for interment with full military honors at Abraham Lincoln National Cemetery, 20953 West Hoff Road, in Elwood at 11:00 a.m.

Family and friends are encouraged to sign the online guest book, upload photographs, and share James’ memorial page by logging onto: www.ReevesFuneral.com

Funeral services and arrangements have been made under the direction and care of Reeves Funeral Homes, Ltd. in Morris (815) 942-2500 .

To order memorial trees or send flowers to the family in memory of James Russell, please visit our flower store.
Send a Sympathy Card