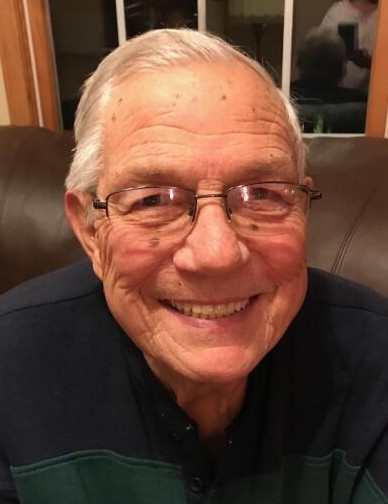 Age 88 of Coal City, passed on September 3, 2020 with his family at his side in Morris Hospital.

James was born on March 15, 1932. He served several years in the United States Naval Reserves, and on April 28, 1956 he married Lois Dennison. James retired from Caterpillar after 31 years and enjoyed 26 years of retirement. He was a lifelong member of the Coal City Area Club and belonged to Assumption of the Blessed Virgin Mary Roman Catholic Church in Coal City. James enjoyed fishing, as well as his cars and motorcycle. He was a shade tree mechanic, loved drag racing and made many memorable trips traveling on his motorcycle. No hobby however was greater than his family. James cherished his grandchildren and never missed a sports or activity that they participated.

A private family Mass of Christian Burial will be held on Wednesday, September 9, 2020 at 10:00 a.m. in Assumption Catholic Church in Coal City with Reverend Raed Bader presiding.

Burial will be in Braceville-Gardner Cemetery, and pallbearers will be: Jacob Watters, Brian Manecke, Jonathon Watters, Brian Gabehart, Tim Gabehart and Dan Perkins.

Preferred memorials in lieu of flowers may be made as gifts in James memory to a charity of the donors choosing.

Family and friends are encouraged to sign the guest book, upload photographs and share James’ memorial page online through social media by logging onto: www.ReevesFuneral.com/obituary/James-Watters

To order memorial trees or send flowers to the family in memory of James Watters, please visit our flower store.