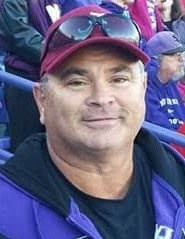 Age 58 of Coal City, passed away unexpectedly on Saturday, March 6, 2021 due to complications from COVID-19.

Born December 28, 1962 in Morris, Illinois, John Joseph is the son of Joan (Eschenbaum) Kauzlaric and the late Kenneth Kauzlaric. He attended Immaculate Conception School and graduated from Morris Community High School with the Class of 1981. On December 19, 1992, John married Kelly Green in Joliet, and together they made their home and raised their family in Coal City.

John was a member of IBEW Local 176 and has been employed with Exxon Mobil for the past 12 years. He was a member of the Coal City Area Club and attended Living Word Bible Church in Morris.

John was a great cook; took pleasure in barbecuing and smoking, and enjoyed craft beer. He had an ear for music and was accomplished on the guitar. His family was his greatest hobby, and John will most be remembered as his kids biggest fan. Family was of utmost importance, and his biggest source of pride was his children, their accomplishments, and their education.

John was preceded in death by his father, Kenny Kauzlaric and his father-in-law, William Green.

Per John’s wishes, cremation rites have been accorded.

The family will receive friends for a COVID observant walk through memorial visitation at Reeves Funeral Home, 75 North Broadway (one block north of Illinois Route 113) in Coal City on Thursday evening, March 11, 2021 between the hours of 5:00 p.m. and 8:00 p.m.

A celebration of life open house is also being planned for John later in the year.

“We are confident, I say, and willing rather to be absent from the body, and to be present with the Lord.” (2 Corinthians 5-8)

Preferred memorials may be made to the family for the continuation of John’s legacy in providing Bridget’s final year of college education.

Family and friends are encouraged to sign the guest book, upload photographs and share John’s memorial page online through social media by logging onto: www.ReevesFuneral.com/obituary/John-Kauzlaric

To order memorial trees or send flowers to the family in memory of John Kauzlaric, please visit our flower store.