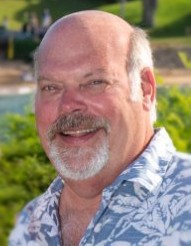 Born in Morris, Illinois in 1960, John was the son of John “Jack” and Jeanne (Beal) Ronchetti. He was raised in Coal City and graduated with the class of 1978.

John met his wife Pamela (née Bogash) in high school. They married on a hot August day in 1980 and together raised their family in Coal City. Throughout his career, John worked at ComEd and Elwood Energy, as well as Morris Hospital, and Chicago Bridge and Iron. He was also involved in the community, serving on the Coal City School Board and as a little league coach for his sons’ sports teams.

Known for his tastes in both music and bourbon, he could name that tune or distillery with unrivaled accuracy. He greatly enjoyed taking trips with Pam and was always on the look out for the next destination. During their travels, his welcoming nature could strike up a conversation with anyone. He was a loving husband, supportive father, and took his role as a fun grandparent quite seriously.

John was preceded in death by his father, John “Jack” Ronchetti, and his brother-in-law, Rich Burns.

The family will receive friends for a visitation at Reeves Funeral Home, 75 N. Broadway (one block north of Illinois Route 113) in Coal City on Sunday, December 5, 2021 between the hours of 1:00 p.m. and 3:00 p.m. Funeral services will follow Monday morning, December 6, 2021 at 11:00 a.m. in New Hope Presbyterian Church, 80 N. Garfield Street in Coal City. Pastor Mark Hughey will officiate, and burial will follow in Ward Cemetery in Verona, Illinois.

Those wishing to participate in the services virtually are welcome to join the live stream on Monday morning beginning at 11:00 a.m. A link for the event is available on John's memorial page.

Preferred memorials may be made as gifts in John’s memory to the Coal City Food Pantry.

Family and friends are encouraged to sign the guestbook, upload photographs and share John’s memorial page online through social media by logging onto: www.ReevesFuneral.com/obituary/John-Ronchetti

To order memorial trees or send flowers to the family in memory of John Ronchetti, please visit our flower store.
Send a Sympathy Card