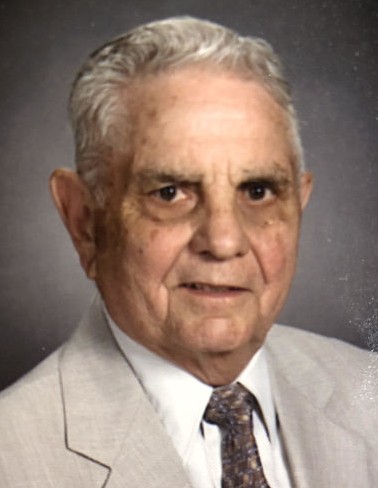 Age 92, passed away on Friday, December 27, 2019 at AMITA Health Saint Joseph Medical Center in Joliet, with his loved ones at his bedside.

Joe was born the only son of Joseph and Janet DeGulie on a farm near the small community of Fairview, Illinois in Fulton County. Joe attended Western Illinois University for three years before his induction into the United States Army. He served his country in the Philippines. Upon release from service, he enrolled in the School of Agriculture at the University of Illinois in Urbana where he earned his Bachelor of Science degree in 1949. He was hired as a teacher of agriculture at Coal City High School in the same year. Joe remained in that position until 1965 when Coal City became a unit district, and he was elevated to principal of the high school and remained in that role until his retirement in 1983. Joe met and married Lucille Plese in 1964 and they spent their entire married life in Coal City. He was a member of Coal City United Methodist Church, and was an early member of the Coal City Lion's Club; an interest he thoroughly enjoyed. Joe remained active in the club until his death.

Per Joe's wishes, there will be no public visitation.

Family and friends are invited for a funeral service at the Berst Center, 150 South Kankakee Street, in Coal City on Tuesday morning, December 31, 2019 at 10:00 a.m. Reverend Brad Shumaker from the Coal City United Methodist Church will officiate, and a memorial luncheon will immediately follow the services. A private family interment will be in Mount Olivet Cemetery in Wilmington.

Family and friends may sign the online guest book, upload photographs, or share Joe's memorial page by logging onto: www.ReevesFuneral.com/notices/Joseph-DeGulie

To order memorial trees or send flowers to the family in memory of Joseph DeGulie, please visit our flower store.
Send a Sympathy Card