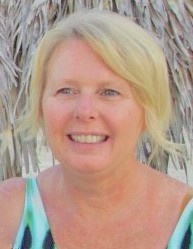 Born February 4, 1963 in Joliet, Katherine Marie is a daughter of Mary Geraldine Latimer Black and the late Peter Kommer. She was raised and educated in Wilmington, and graduated from Wilmington High School with the Class of 1982. Kathy married Andrew Adams in 1982 at Saint Rose of Lima Catholic Church in Wilmington, and together they raised their family in Plainfield, Illinois until relocating to Guyton earlier this year. She was a beloved wife, mother, daughter and sister, who will be missed dearly by all who knew her.

Kathy was preceded in death by her grandparents; her father Peter, and step-father: Bill Black; her sister: Kelly Black; her uncle: Robert Latimer; and her father-in-law: Glenn Adams.

Per Kathy's wishes, cremation rites have been accorded.

Family and friends may sign the online guest book, upload photographs, or share Kathy's memorial page by logging onto: www.BaskervilleFuneral.com

Memorial services and arrangements have been made under the direction and care of Baskerville Funeral Home in Wilmington (815) 476-2181.

To order memorial trees or send flowers to the family in memory of Kathy Adams, please visit our flower store.
Send a Sympathy Card