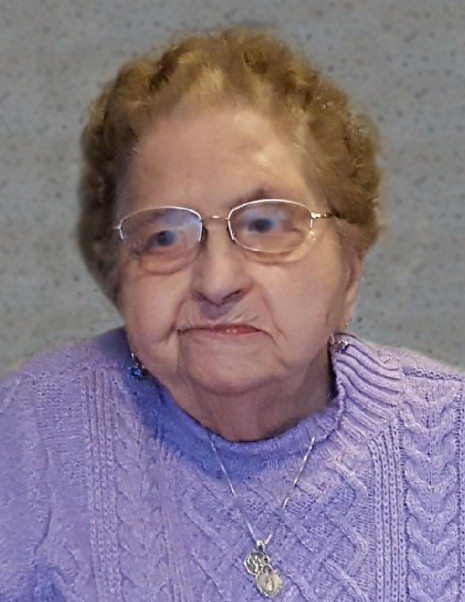 Age 96 of Coal City, passed away peacefully on Wednesday afternoon, May 1, 2019 at her home with her family by her side.

Born at the family home on July 12, 1922 in Carbon Hill, Delores Lucille “Lorrie” was a daughter of Frank and Ursula (Korelc) Skubic. She was raised in Carbon Hill, where she attended the Carbon Hill School, and went on to graduate with the Coal City High School Class of 1939. On May 17, 1944, Lorrie married Marvin Wayne Tyler at the Assumption Catholic Church Rectory, and together they made their home and raised their family in Coal City.

Lorrie was a member of Assumption of the Blessed Virgin Mary Roman Catholic Church in Coal City; she served as President of the Assumption Catholic School Mothers Club; she was a founding member of The Martha’s, and she volunteered at St. Joseph Medical Center in Joliet. Lorrie truly enjoyed being a homemaker and was known for her great homemade pies and exceptional meals. Also a great fan of the Chicago White Sox, Lorrie especially enjoyed following them during their spring training.

One who looked forward to car rides on Sunday’s, Lorrie also took great pride in decorating her home as well as with visiting with her family, friends and neighbors on 365 Second Street.

Survivors include her daughters, Karen (Joseph) Grega and Kathleen (the late Joseph) Lestina, both of Diamond; grandchildren: Kimberly (Mark) Pavlis, Aaron Lestina and Brian Grega, and one sister-in-law, Joanne Skubic, as well as her dedicated caregivers.

The family will receive friends for a visitation at Assumption of the Blessed Virgin Mary Roman Catholic Church, 215 S. Kankakee Street in Coal City on Tuesday, May 7, 2019 from 10:00 a.m. until the time of funeral service 11:00 a.m. A Mass of Christian Burial will be celebrated with Reverend Robert Noesen presiding and Deacon William Dunn assisting.

Burial will follow in Abraham Lincoln National Cemetery, where Lorrie will be laid to rest with her late husband Marvin.

Family and friends may sign the guestbook, upload photographs or share Lorrie’s memorial page online by logging onto: www.ReevesFuneral.com/notices/Lorrie-Tyler

To order memorial trees or send flowers to the family in memory of Lorrie Tyler, please visit our flower store.
Send a Sympathy Card