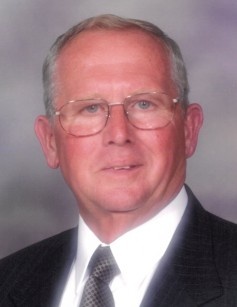 Age 80 and a lifelong resident of Coal City, passed away peacefully Monday, May 20, 2019 at his home surrounded by family.

Born April 30, 1939 at home in Coal City, Orville Adelbert was the youngest of seven born to Clyde Gibson and Lucille Katherine (Colson) Miller. He was raised in Coal City, and prior to graduation from Coal City High School entered into the United States Navy on July 5, 1956. He served on the USS Ticonderoga and was honorably discharged following his obligation in the Reserves on June 5, 1962.

On September 26, 1959, Buck married Marlene Rogers in New Hope Presbyterian Church, and together they made a home and raised their family in Coal City.

After the service, Buck worked a short time at the paper mill, before gaining employment with Caterpillar Tractor Company in Joliet. It was here that he began on the burr bench and went on to retire as a foreman in 1995, following 37 years of service. Following his retirement, Buck acquired a position at Cinder Ridge Golf Course, where he enjoyed cutting the greens and golfing.

Growing up, Buck was active in the Boy Scouts, earning his Eagle Scout at the age of 13, and later in life served as a Scout Master. In addition to golfing, Buck also enjoyed woodworking, gardening, spending time in his yard and traveling. There was no greater hobby to Buck than his family, and he cherished family vacations, spending time together, and following his grandchildren in their activities.

The family will receive friends for a visitation at Reeves Funeral Home, 75 N. Broadway (one block north of Illinois Route 113) in Coal City on Thursday, May 23, 2019 between the hours of 4:00 p.m. and 8:00 p.m. Buck will then lie in state Friday morning, May 24, 2019 at the Coal City United Methodist Church, 6805 East McArdle Road in Coal City from 9:00 a.m. until the time of funeral service 10:00 a.m. Reverend Brad Shumaker will officiate, and burial will follow in Braceville-Gardner Cemetery.

Family and friends may sign the guest book, upload photographs or share Buck’s memorial page online by logging onto: www.ReevesFuneral.com/notices/OrvilleBuck-Miller

Click to download / open
To order memorial trees or send flowers to the family in memory of Orville "Buck" Miller, please visit our flower store.
Send a Sympathy Card