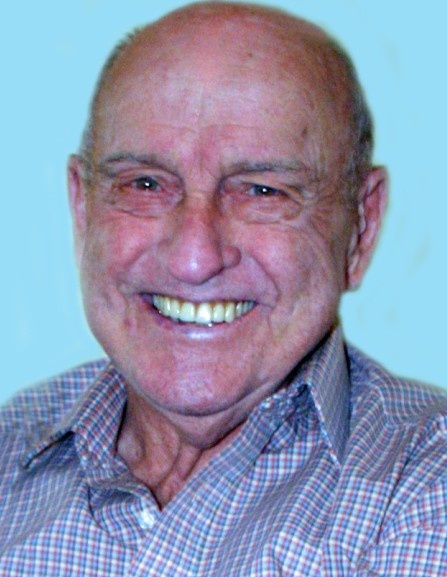 Born May 21, 1927 in Symerton, Illinois, Richard Joseph was a son of Joseph Grover and Mary Angela (Baskerville) Spangler. He was raised in Florence Township; attended the Symerton School, and went on to Joliet Township High School for two years before transferring to Wilmington High School. At the age of 17, Dick worked at the shipyards in Seneca before entering into the United States Navy. He honorably served in the Pacific Theater of Operations during World War II on the USS Birmingham, and was a Kamikaze survivor. Upon his honorable discharge, Dick returned home to Florence Township, where he farmed for the remainder of his life, actively until the age of 89.

On November 29, 1952, Dick married Mary Patricia Benson in St. Mary’s Church on Ottawa Street in Joliet. Together they made their home and raised their family in Florence Township. Aside from farming, Dick always remained active and over the years worked at the Paper Mill in Wilmington, the Joliet Arsenal during the Vietnam War, and labored in construction during the winter months for Ray J. Benoit Construction.

An avid boater, all of his adult life, Dick belonged to the Joliet Yacht Club, Punta Gorda Isles Yacht Club and the Charlotte Harbor Yacht Club. He enjoyed wintering in Punta Gorda, Florida with Pat for nearly 40 years, and the Christmas season was one, which Dick enjoyed not only decorating at home, but his boat. His other memberships included: St. Rose Catholic Church in Wilmington, Wilmington VFW 5422, Wilmington American Legion 557, Knight of Columbus – Fr. George Kuzma Council, Punta Gorda Elks Lodge and the Kamikazi Survivors Club.

One whose age never impeded his hobbies or interests, Dick loved to ride his Harley Davidson, which he acquired at the age of 75 and rode until the age of 85. He also took pleasure in keeping up with technology, especially social media, and was sure to never miss Monday night WWE wrestling.

Throughout his rich and rewarding life, Dick made the most of each and every moment he was given. He was a man of honor and courage with a strong work ethic that remained well into his sunset years. With a life that spanned times of war and times of peace, times of plenty and times of want, Dick Spangler leaves behind a priceless collection of memories, none more important than that of a husband, father, grandfather and great grandfather.

The family will receive friends for a visitation on Friday, November 23, 2018 between the hours of 4:00 p.m. and 8:00 p.m. at Baskerville Funeral Home, 700 East Kahler Road in Wilmington. Funeral services will follow Saturday morning, November 24, 2018 at 10:00 a.m. in St. Rose Catholic Church, 604 S. Kankakee Street in Wilmington. A Mass of Christian Burial will be celebrated with Reverend Sebastian Gargol officiating.

Family and friends may sign the guest book, upload photographs or share Dick’s memorial page online through social media by logging onto: www.BaskervilleFuneral.com/notices/Richard-Spangler

To order memorial trees or send flowers to the family in memory of Richard Spangler, please visit our flower store.