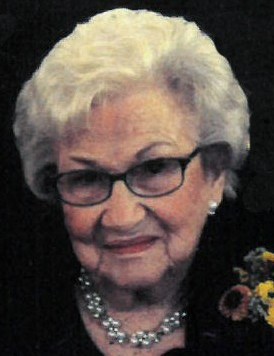 Age 97 of Morris, formerly of Wilmington, passed away Monday, March 2, 2020, at Park Pointe Healthcare and Rehabilitation in Morris.

Born January 31, 1923 in Assumption, Illinois, Roberta was the daughter of John and Maria (nee Recrosio) Brush. She was raised and educated in Central Illinois, and was a member of Immaculate Conception Catholic Church in Morris. Roberta devoted her life to being a wife and mother, who made being a homemaker and raising her family her top priority.

The family will receive friends for a visitation on Wednesday, March 4, 2020, at Immaculate Conception Catholic Church, 600 East Jackson Street, in Morris from 9:00 a.m. until the time of funeral services at 10:30 a.m. A Mass of Christian Burial will be celebrated with Reverend Ed Howe, CR presiding, and interment will follow in Saint Mary Catholic Cemetery in Evergreen Park.

Preferred memorials may be made as gifts in Roberta's memory to the American Cancer Society.

Family and friends may sign the online guest book, upload photographs, or share Roberta's memorial page by logging onto: www.ReevesFuneral.com

To order memorial trees or send flowers to the family in memory of Roberta Burke-Kroncke, please visit our flower store.
Send a Sympathy Card