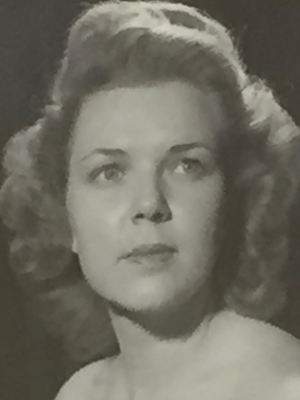 Born July 29, 1919 in Joliet, Ruth was the daughter of Charles W. and Laura L. (Sievert) Arnold. She was raised and educated in Joliet, Illinois and attended Joliet Central High School. Ruth left school early in order to go to work and help support her family. Over the years, she also worked for Dr. Muncy in Joliet, Coils in Mazon as a factory worker, and co managed Bar I + III in Rural Verona. On July 15, 1950, Ruth married William F. Walsh in Kinsman, Illinois, and they would have three children and numerous grandchildren and great grandchildren.

She was a devoted Christian, and held memberships with Willow Avenue Presbyterian Church in Joliet, Morris Assemblies of God in Morris, the Verona Methodist Church, where for a time she was the church secretary, as well as the clerk for Village of Verona for a number of years. In her youth, Ruth was an avid bowler, roller skater, and ice skater. She also had a talent for sewing, and was proud to be a Den Mother for the Cub Scouts in Verona during the 1960s.

Ruth was preceded in death by her parents and husband, William; and two brothers: Howard and Elmer Arnold.

Per Ruth’s wishes, cremation rites have been accorded, private graveside services were held and a memorial service will be planned for a later date.

Preferred memorials may be made as gifts in Ruth’s memory to the Salvation Army.

Family and friends may sign the online guest book, upload photographs, or share Ruth’s memorial page by logging onto: www.ReevesFuneral.com/notices/Ruth-Walsh

To order memorial trees or send flowers to the family in memory of Ruth Walsh, please visit our flower store.