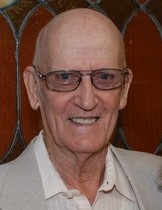 Born August 2, 1927 in Kankakee, Wayne Conrad was a son of Ellsworth and Valedda (Shreffler) Milton. He was raised in Rockville Township and graduated from Reddick High School with the Class of 1945. On August 27, 1949, Wayne married Phyllis Laverne Kamis, and together they made a home and raised a family together.

Wayne farmed for the majority of his life, and resided on farms in the Manteno, Ritchie and Symerton areas before retiring to Wilmington. In addition to farming, Wayne in his earlier years worked at the Joliet Army Ammunition Plant as a car blocker; drove a school bus, and served as a substitute rural mail carrier. He later gained employment with the City of Wilmington, where he retired as the Water Plant Operator.

One who loved to travel, Wayne also took pleasure in handyman projects; often joking that he could fix anything with duct tape and a Swiss Army knife. Following his formal retirement, he continued to help the family for many years during the harvest season, driving the grain truck to the elevator. Wayne was an active member of the First United Methodist Church of Wilmington; belonged to the Will County Farm Bureau, where he served on the Board of Directors; was past founding member of the reorganized Catfish Days Committee; past member of the Wilmington Park District and was a former board member of Oakwood Cemetery Association in Wilmington.

The family will receive friends for a visitation at Baskerville Funeral Home, 700 East Kahler Road, in Wilmington on Thursday, October 7, 2021 from 9:00 a.m. until time of funeral service at 11:00 a.m. Reverend Harriette Cross from the First United Methodist Church of Wilmington will officiate.

Burial will follow in Oakwood Cemetery, Wilmington, where Wayne will be laid to rest with his late wife, Phyllis.

Preferred memorials may be made as gifts in Wayne’s memory to the FIrst United Methodist Church of Wilmington, 401 East Kahler Road, Wilmington, IL 60481

Family and friends may sign the guest book, upload photographs and share Wayne’s memorial page online through social media by logging onto: www.BaskervilleFuneral.com/obituary/Wayne-Milton

To order memorial trees or send flowers to the family in memory of Wayne Milton, please visit our flower store.