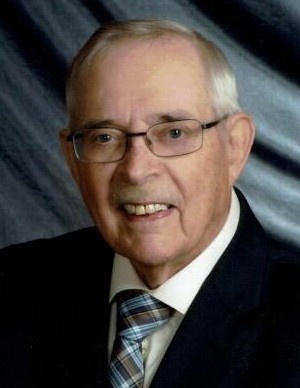 Born February 27, 1938 in Bowling Green, Missouri, William Edwin was a son of Avery Thomas and Zelda Rhea (Branstetter) Locke. He was raised in the small community of Adair, Illinois until moving with his family to Macomb, Illinois, where he graduated high school. Bill went on to honorably serve in the United States Army from 1961 to 1963, and following his honorable discharge, graduated from Western Illinois University with a Bachelor’s of Science in Education in 1966. This was the beginning of a lifelong passion for learning. He later earned his Master’s in Arts degree from WIU in 1971 and his Master’s of Art in Educational Administration from Governors State University in 1987.

On August 3, 1968, Bill married Dorothy Pearl Austin in the People’s United Methodist Church in Symerton, Illinois, and they initially made their home in Macomb before settling in Wilmington.

Mr. Locke’s legacy of education began in 1965, when he began teaching Social Studies at West Junior High in Kankakee until 1968. He then began teaching English as a WIU graduate assistant in Macomb until gaining a position with the Wilmington School District in 1971. Mr. Locke taught English at Wilmington High School from 1971 until 1989, when he became Principal of Bruning Elementary School. Following his retirement from the Wilmington School District 209-U in 1991, Mr. Locke went to work for Com-Ed, where he served as a Training Instructor until formally retiring in 2001. He was a member of the Wilmington Lodge #208 A.F. & A.M.; was an honorary member of the St. Anne Lodge #1092, Peotone Lodge #636, Braidwood Lodge #704, and the Mazon Lodge #826, and was a 32nd degree Mason with The Valley of Bloomington. Bill belonged to the Wilmington Moose Lodge #241, the South Wilmington Fire & Beach Club, was a dedicated Catbacker, and active with the Wilmington Community Band. Bill was a charter member of the Wilmington Island Square Dance Club, was a former Wilmington Public Library Trustee, and bowled on the Wilmington Merchants Bowling League since the 70's. He was a past member of the Adair Methodist Church, active member of the First United Methodist Church of Wilmington; volunteered at Kuzma Care Cottage and Christian Help Association, and served as a Will County Auxiliary Police Officer in the 70’s.

Mr. Locke kept his mind sharp by doing daily crossword puzzles, Sudoku and crypto quotes. He loved golf, bowling, tennis and square dancing. He was the largest and most devoted Wilmington Wildcat advocate, and was sure to not miss very many football games. The community of Wilmington was one of his top priorities, however his love for family and spending time with them stood above all. Bill cherished the close relationship he held with his granddaughter, and the countless hours they spent together. Bill loved to compose or author many unread and unshared articles, and when he started reading a book, it was not uncommon for his family to not see him until it was finished.

Mr. Locke loved to teach and to continue learning. He was known for his warm smile, and will be remembered for the mentorship and guidance, which he provided to so many throughout the years.

Survivors include his loving wife of 53 years, Dorothy; daughter and son-in-law, Andrea and Nathan Weber; granddaughter, Season Shumard; brother, Paul (the late Joyce) Locke and sister, Patricia Crawford, both of Macomb, and brothers-in-law and sister-in-law: Harold (the late Delores) Austin of Machesney Park, Wayne (the late Thelma) Austin of Woodridge, Ruth (the late Rudolf) Trusheim of Grimes, Iowa, and Charlotte (the late Walter) Austin of Peoria. Bill had too many nieces and nephews to list, but he loved every one of them. In addition, throughout the years he gained so many important people in his life it almost seems unfair not to mention them. One does stand out however, and that is Bill Rowland. Bill has spent decades being a part of the Locke family daily life.

Bill was preceded in death by his parents; sister, Virginia Garrison, and his father-in-law and mother-in-law: George and Pearl Austin.

The family will receive friends for a COVID observant visitation at the First United Methodist Church of Wilmington, 401 East Kahler Road in Wilmington on Friday, January 14, 2022 from 4:00 p.m. until the time of Masonic funeral rites at 7:00 p.m.

Masks will be required for those attending the visitation and funeral services.

Anyone wishing to participate in the services virtually are welcome to join the live-stream which will begin at 11:00 a.m. on Saturday morning through the following link: https://www.hdezwebcast.com/show/william-locke

Burial with military honors will be in Oakwood Cemetery, Wilmington.

Family and friends are encouraged to sign the guest book, upload photographs and share Bill’s memorial page online through social media by logging onto: www.BaskervilleFuneral.com/obituaries/William-Locke

To order memorial trees or send flowers to the family in memory of William Locke, please visit our flower store.