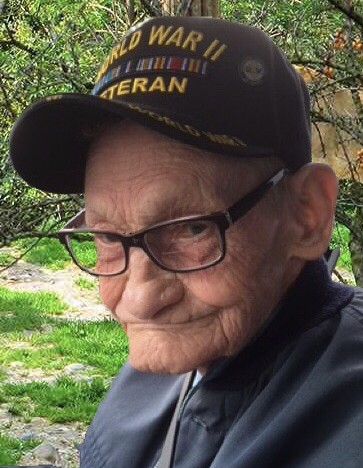 Born in the family home on March 13, 1923 in Ledford, Illinois, William was a son of Fred and Roena (Bennett) Waltz. He was raised Harrisburg, Illinois and went on to honorably serve in the United States Army during World War II. Bill worked as an iron fabricator for Pratt Industries, and retired at the age of 65 following more than 40 years of dedicated service. Bill was a fiercely independent individual who enjoyed woodworking, as well as working around his home and yard.

Bill was preceded in death by his parents; wife of 39 years, Mildred “Midge” (nee Corlett) whom he married in 1973, and who preceded him in death on January 13, 2012, and ten brothers and sisters.

Per Bill’s wishes, cremation rites are being accorded, and he will be laid to rest with his late wife Midge in Wesley Cemetery in Ritchie.
Preferred memorials may be made as gifts in Bill’s memory to a charity of the donor’s choosing.

Family and friends may sign the guest book by logging onto Bill’s memorial page at www.BaskervilleFuneral.com

Cremation services and arrangements have been made under the direction and care of Baskerville Funeral Home, 700 East Kahler Road in Wilmington. (815-476-2181)

To order memorial trees or send flowers to the family in memory of William Waltz, please visit our flower store.
Send a Sympathy Card